Failed Meeting in the Square

Do you remember the faces of the people you meet?

This is the story of a failed meeting; it happened about twenty-five years ago and made me aware that I do not think like others.

On a visit to the US, I was invited to meet my son’s mother-in-law’s boss who was planning to visit London in the coming months. She wanted to ask me a lot of questions about planning her trip. It was decided that we should meet over lunch, which proved to be in a rather nice upscale restaurant, at her expense.

We sat, ate and talked for around ninety minutes. She asked some questions like what to wear, what to see, and to my mix of horror and amusement, which areas of London were too dangerous to visit. I thought about this for a moment, then assured her that I did not think there were any such areas. She expressed concern that Brixton might be an area she should avoid, due to something she read about the background of the population there, but I assured her that Brixton Market was a lot of fun, and tried not to be irritated by what seemed to me, a til bit ignorant.

I left this meeting knowing that she was expecting to travel in the following October (it was July). The plan was she would phone me on arrival and we would arrange to meet so that I could show her around my London.

Come October, I got the call.

Where should we meet?

I suggested Leicester Square. It’s a good venue for a meet-up, not so large that we could miss each other. I even spelled out ‘Leicester’ because well, you know why, and suggested we meet at 2:00 pm at the statue of Charles Chaplin. Everyone in the States knows who he was, so it seemed a good bet.

With my partner Paul, I travelled to London to meet her. On the way to Leicester Square, there was a hold up on the Tube and we arrived five minutes late. It was raining with some enthusiasm and we had no umbrella. Of course, the square was relatively empty, but I went and waited by the statue anyway.

My husband who sought shelter and had been keeping dry, joined me after some time had gone by. He then proceeded to ask the inevitable:

After a series of questions about what this woman looked like my partner, who had a perfectly functioning ‘mind’s eye’, was growing very frustrated and we were both becoming very wet from all the rain.

We waited a few more minutes in the hopes that she would recognize me, something I have depended upon all my life (I now realize).

Nobody came forward, so at 2:45 pm we gave up and went indoors.

I should point out that at this time mobile phones were not universally used and I had no way of contacting this person while I waited in the square.

On our arrival home there was a message waiting on the answering machine (Remember those?). The message said:

“I waited for you by Nelson’s Column in Trafalgar Square, but we must have missed each other. Sorry about that.”

Even if I could have remembered what she looked like, we would have never found each other anyway, since she misinterpreted the meeting place. We laughed it off, and that was that.

This event wasn’t all for naught; The failed meeting in the square made me realize something – perhaps for the first time in my life – that I do not think like others. I do not rely on visual imagery to recall the faces and features of the people I have met before.

This has always been my normal. I thought when people would describe “seeing” a person or the ability to recall an image of that person in their mind, that it was just metaphorical but apparently it isn’t.

They really do ‘see’ images in their mind.

Fast forward many years, there is now a word for this lack of visual memory: ‘Aphantasia’.

While having a word for it doesn’t change my experience, I now know I am not totally alone. It has also helped my partner of many years better understand my lack of visual memory, and be more patient with me in these moments as a result.

Being aphantasic hasn’t got in the way of my education, nor my work as an adult. I have a degree and a limited circle of friends who now understand – or at least are trying their best to understand – how my thought processes differ. They don’t all really get that I do not see pictures of their faces in my mind yet, but I’ll forgive them that,most days 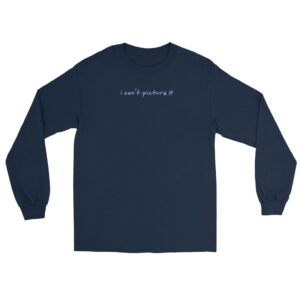